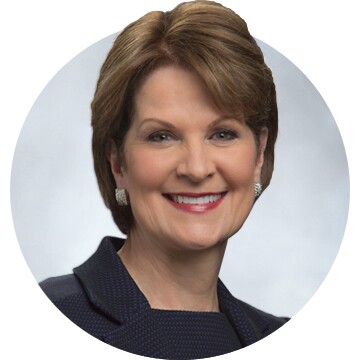 Ms. Hewson, age 66, became the Executive Chairman of Lockheed Martin Corporation (aerospace) in June 2020, having served from 2014 to June 2020 as Chairman, President and Chief Executive Officer. Ms. Hewson was Chief Executive Officer and President of Lockheed Martin from January to December 2013 and has served as a Director since 2012. Ms. Hewson currently serves on the University of Alabama’s Culverhouse College of Commerce Board of Visitors and its President's Cabinet, the Boards of Governors of the United Service Organizations (USO) and Aerospace Industries Association, the Boards of Directors of the Congressional Medal of Honor Foundation, Catalyst, Inc., and the Business Roundtable, and the International Advisory Board of the Atlantic Council. Ms. Hewson also serves on the Board of Trustees for King Abdullah University of Science and Technology in the Kingdom of Saudi Arabia and Khalifa University of Science and Technology in the United Arab Emirates.