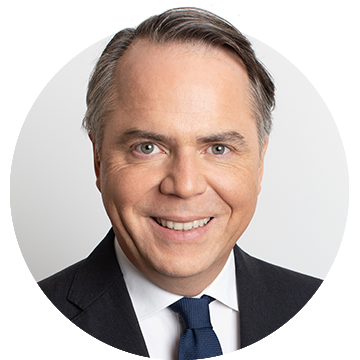 Thibaut Mongon is Executive Vice President of Johnson & Johnson and Worldwide Chairman, Consumer Health. He serves on the corporation’s Executive Committee and leads the Consumer Health Group Operating Committee. In his role, Thibaut leads the global development of Johnson & Johnson’s health and wellness products and solutions in skincare, self-care, oral health, baby care, women’s health and wound care, generating approximately $14 billion of revenue. Leading operations in more than 140 countries with 19,000 associates, Thibaut is steward to the success of some of the world’s most iconic brands, including JOHNSON’S®, NEUTROGENA®, LISTERINE® and TYLENOL®.

Thibaut is a seasoned global leader who has lived and worked on five continents across all three sectors of Johnson & Johnson in his 20 years at the company. Before being elevated to his current role, Thibaut served as Company Group Chairman, Johnson & Johnson Consumer Health Asia-Pacific. From 2014 until early 2019, Thibaut led the transformation of this region into an engine of accelerated revenue growth by creating a vibrant pipeline of consumer-centric innovation. A champion of the relentless pursuit of new and better ways of working, he has empowered the organization to embrace e-commerce and digital transformation, and generated significant value through both external partnerships and strategic acquisitions, including Ci:Z Holdings, the makers of the Dr.Ci:Labo largest stand-alone acquisition ever made by Johnson & Johnson in Asia.

Thibaut joined Johnson & Johnson in 2000 as Director of Marketing for the Vision Care group in France and subsequently held general management positions as Country Manager France, Belgium and North Africa, Managing Director Latin America, and President Asia-Pacific. Thibaut transitioned to the Pharmaceutical Group of Johnson & Johnson in 2012 as the Global Commercial Strategy Leader for the Neuroscience therapeutic area, based in the U.S.