Share
To help mark 75 years since the company went public, we're retracing some of the pivotal acquisitions, inventions and decisions that have guided the company for more than a century.
By Camille ChatterjeeJanuary 22, 2019
Today's Top Reads Close
B

ack in 1943, General Robert Wood Johnson famously crafted Our Credo—the Johnson & Johnson mission statement that guides company thinking to this day, from big-picture deals and acquisitions down to the most basic day-to-day decisions.

The ethics it outlines, though, date back nearly 60 years earlier. That’s when Johnson & Johnson was founded to help address an unmet medical need for safer, sterile surgical products that could help save the lives of more patients—and make it easier for doctors to do so.

This blend of business savvy and concern for the health of humanity would go on to characterize the company throughout its 133-year history.

As we start a new year—and celebrate 75 years since the company went public—we take a look at just some of the ways the company has exemplified Credo-based thinking, from 1886 to the present, in this fun timeline. 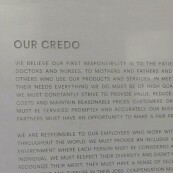